These belts are made out of Polyurathane, and dry out over time, becoming very brittle. They both loose their elasticity, and causing numerous other problems. Any sign of a loose band should be replaced before reading a tape.

Chuck(G) reports: "The way the tech (who remembered how it was done) at Imation said that they were basically punched out as rings from a sheet of poly, then a special machine would "flip" them and apply them to the cartridge. He thought that the QA lab might still have a manual version of the machine, but he turned up nothing--so it's probably history."

Chuck(G) goes on to clarify: "By "flip" I mean change from an annulus to a cylinder. According to the guy at Imation, it's not possible to do this unaided by a special jig. I don't know if that's true or not, but he was firmly of that opinion."

"Contacts at Imation state that the belts are punched as rings from a flat sheet of PU, then a special machine twists them into their final cylindrical shape and applies them. He tried to find the "manual" version of the belt application tool in their labs, but turned up nothing. You can see this annulus-to-cylinder transition in reverse by taking a fairly fresh belt and boiling it for a few minutes in water--the belt reverts to a ring shape."

To Determine Tension Band "Health", read this message on CCTalk from Al Kossow.

Or better yet, read all 8 messages in the entire thread. It is very enlightening.

A message in this thread also includes a trick on restoring belts that have not completely disintegrated, by using hot water.

But for more "hands-on" demonstration of belt replacement, please watch both of these videos here:

After watching this, my friend Tom suggested: "Keep a supply of chopsticks on hand for things such as this.  The ends could be whittled to smaller diameters or configurations to make safe tools.  Bamboo is a much underutilized material."

These videos were Inspired by Al Kossow on the ClassicCmp List (CCTalk) at
http://bit.ly/1aL5wjD

The Archive Scorpion manual that I reference can be found here:  http://bit.ly/1eGHmqg

Special thanks to Al at the Computer History Museum in Mountain View CA, for sharing the instructions and experience from which this video is based.

I have found that, when choosing a replacement band, that the 3M and Imation brands have held up the best over time.  Just choosing a DC6150 tape, even if it has never been opened or used, may not yield a good tension band.

I have examples where new, unused, unopened DC6150 cartridges branded FUJI and Carlisle had bands that were far worse than the ones that I wanted to replace.  For the purpose of stealing the bands, buying those tapes were a complete waste of money, other than the benefit that I may now warn any of you reading this not to buy those tapes for this purpose.

Here is an example of a good belt (pulled from an Imation DC6150 tape) that has retained its original "flat ring" shape.  I am looking to see if I can get similar Polyurethane sheets, and punch (or even cut with scissors) 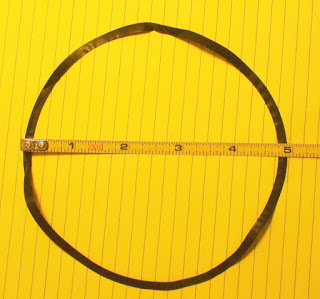 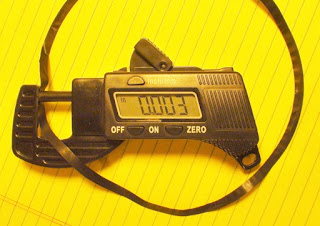 •
Boiling Tension Bands to "restore" them

> But you can "restore" a worn our belt by applying heat. The best is to pour hot \
> water (70°C should be good enough) and you'll see how the belt shrinks and regains \
> its dark black color. After that, clean the belt (it may have some sticky residues \
> on the surface) and restore it in the cartridge. The shrunk belt has a length of \
> 12-18 cm instead. I've successfully restored many belts with that method.

Wow, that was an interesting experiment.

I had 15 belts, fired up the tea kettle and poured the water into the bands in a \
coffee cup.

As you say, the process throws off a sticky residue, wiped it off and let them dry at \
room temperature. I was able to save 5 of the 15. About half just snapped when I \
tried tensioning them (these are out of carts from the mid-80's) some as you say went \
down to 12cm.

The residue that the deteriorated belts can leave on the tapes is not only visible, but it can be damaging to the tape media underneath.

Al Kossow on this topic:  "The 3M cartridge design is broken in that the belt contacts the OXIDE side of the tape and not the backing. As the belt dries out, it binds to the tape binder on the oxide side gluing the binder to the belt. If you are unlucky, the tape wasn't rewound into the BOT/EOT zone and it lifts the binder in the data area. Even if it is in the BOT/EOT zone, you can end up with a situation where so much binder is gone that it confuses the EOT/BOT optical sensors. Neither Chuck nor I have come up with a way to cover the bare area up enough to fool the optical sensors." 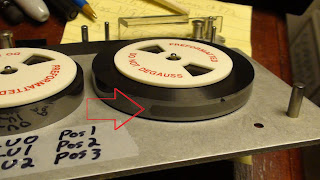 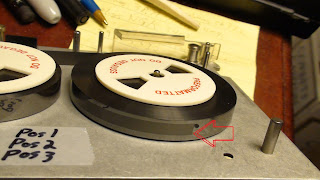 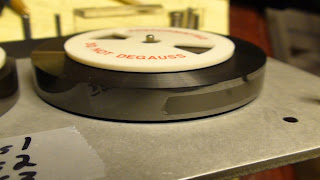 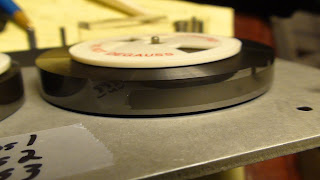 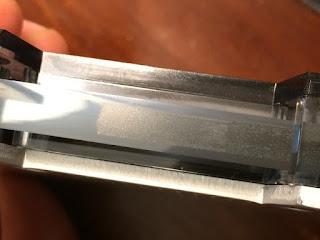 If the tape was left in an "un-rewound" position (as it was in the examples pictured above), and just left mid-tape from the last time it was read, or written to, those areas of the tape can be particularly difficult, if not impossible to read.  We are making every effort here to research how to recover the data in these conditions, and will document the painstaking process here on this site.

See our discussion on this topic at Tapeheads.net

Here are 80x magnifications of the tape residue 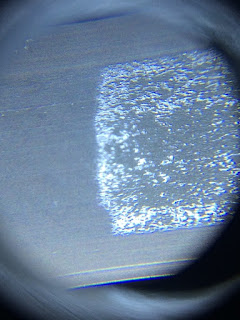 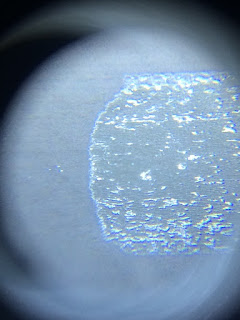 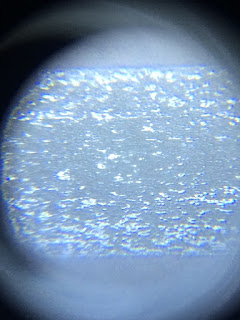 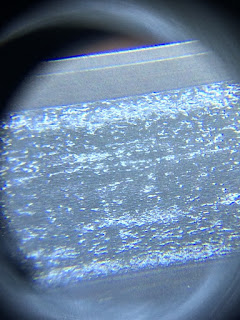 And here, we've applied Kyread solution to the tape, to show what appears to be the magnetic flux transitions continuing uninterrupted.  But many times attempting to read this tape always errors out in this spot.  We will keep trying! 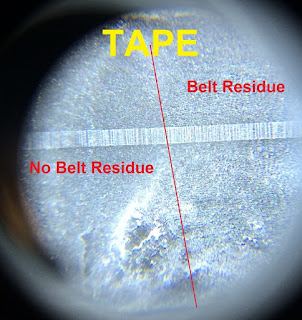 See our discussion on this topic at Tapeheads.net