Warning: Using Kyread Solution has been demonstrated to damage the magnetic flux transitions on the tape. If you value your rare data or programs, DO NOT try this until you have completely restored and read a tape 100% error-free...(or if you have given up all hope, which we hope isn't the case. There's always a way, no matter who tells you that it can't be done). 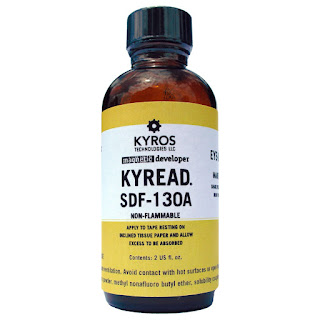 See our thread on Tapeheads.net

I've been using KyRead solution to see the data tracks on my QIC data tapes.

My experience so far has been only with the Kyread solution (ferrofluid), applied directly to the tape (which I think is clearly invasive). And it does seem to negatively affect the magnetic signals on the digital DC-600 QIC tapes.

In my tests, using a standard Tandberg 3620, I write a test file to the tape, then read it back to verify that it is a good write. Then I apply the Kyread to the tape and visualize the magnetic signals (like I showed in my pictures just below).

Then I wiped it off carefully with a Q-tip, and then tried to read the file from tape again. It usually produces an error, and at least becomes unreadable by that particular drive. So it certainly seems like the ferrofluid Kyread has a negative affect.

I have not yet repeated my same test with before and after Kyread with my custom QIC reader hardware, but at some point I will do that, and report the results here, if anyone finds it interesting.

I think it works fairly well, but my largest concern is the scratches that it leaves on the surface of the tape when wiped off or accidently smeared with the optical magnifying devices I'm using.

I'm wondering if anyone can speak to the detrimental affect of surface scratches on magnatic data tape such as this.

AND, also, I looked into some interesting other methods of visualizing the magnetic signature/stream (whatever you call it) on the tape without putting the fine abrasive like KyRead particles directly onto the tape.

For example, the fascinating 3M Magnetic Tape Viewer device. Has anyone here ever owned or used one of these?

I guess it's also referred to as the Plastiform Magnetic Viewer.

In this thread, someone who goes by Mike Casey says:

They all have the same problem... the viewer must be kept in a "humidor" container with a moistened sponge to keep the device from drying out. Even in the humidor container, the sponge dries out at an alarming rate and if you are not very attentive to it, one day you open the container to find it has dried out and has been rendered useless.  You can't fix it... it's now an expensive piece of garbage destined for the landfill.

These things work for the purpose, but suffer a few problems. You can't see the physical edges of the tape so you can't determine if you have a tracking problem.  The recorded level on the tape MUST be high or the viewer will not display anything useful.

He goes on to extol the virtues of using Kyread, which I already have demonstrated can be invasive and destructive.  I would be willing to try one in my tests, but they are quite pricey:  $99-$400 range.

I just ordered from eBay a 2" x 2" card doing something similar. I couldn't see a single thing on any tape whatsoever.

And scroll down to mwhite66's post where they say "Old news. We had those back in the '50s for directly viewing magnetic tape data. I have personally used one to visually pull data off a corrupted tape. You can see the individual magnetized domaines that made up the data."
That's EXACTLY what I am wanting to do here, and why I am going through this reserach effort.

Digital vs Analog Visualization side by side.
Why does the Analog look so similar to the digital?

Or this thing, called a Magview?

And here it is again: 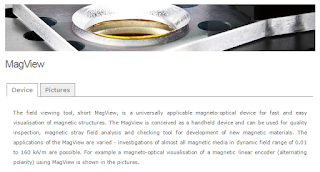 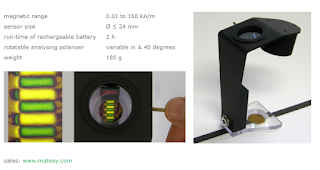 This topic was discussed previously on the thread "Magnetic Developer AKA Magna-See", but I wanted to expand it a bit.

And It looks like a similar topic was discussed on an older newsfeed forum:


See our thread on Tapeheads.net